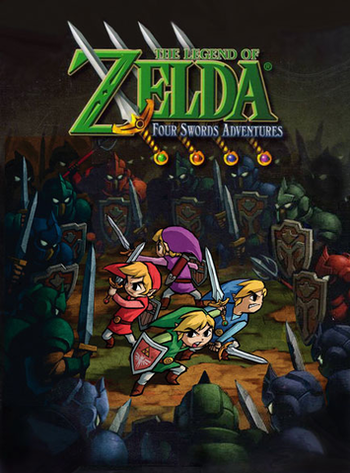 In order to successfully slay The Legions of Hell, always have some clones in stock.
"Our journey is fraught with danger, but together we four might overcome the mages' dark magic... ONLY THEN will all the maidens be released and our princess, once again, be rescued."
— North American ad campaign

The eleventh game in The Legend of Zelda series was a sequel to the earlier Four Swords and was released in 2004. Like its predecessor, it focused on multiplayer gaming for up to four players, and was much more linear in design than the average Zelda title (though the areas themselves had room to explore). A key component of the gameplay was the use of the GCN-GBA link cable which was required for multiplayer (though single player mode did not require it, instead putting an emulated GBA screen on the TV itself). The action of the game was split between the TV screen for the main areas, where all players could see what was going on, and the GBA screens, which represented indoor areas as well as the Dark World, where each player could only see their immediate surroundings. Unlike the previous game, all four Links were always present no matter how many actual players there were - the excess Links would follow the players and could be placed into formations.

The story is a sequel to Four Swords and features the return of Vaati. According to the Hyrule Historia, this is currently the chronologically last game in the "child" timeline, following The Legend of Zelda: Majora's Mask and The Legend of Zelda: Twilight Princess. While Zelda is attempting to strengthen the seal on Vaati, Shadow Link kidnaps Zelda and the six shrine maidens, forcing Link to pull the Four Sword from its pedestal and release Vaati once more. Over the course of the game, it's revealed that Shadow Link was actually a minion of Ganon, who is attempting to cover the land in darkness with Vaati's help.

In addition to the cooperative multiplayer mode (known as "Hyrulean Adventure"), there is also a competitive battle mode, "Shadow Battle", in which the Links fight against each other. Of course, it's not like they weren't fighting already...

The Japanese version also includes a mode called Navi Trackers, that has the Links hunting down stamps held by Tetra's pirates in a maze. Tetra is fully voiced, and would announce various gameplay elements on the TV, and due to the way the Japanese works, she'd actually state the name the players input. (Limited to Two characters and a gender selection). Originally titled Tetra's Tackers it was announced as it's own game before later being moved to be included with Four Swords Adventures under it's final title. While work on an English version was started (With the "names" being limited to a single letter resulting in Mr. A and Ms. B and so on) it was never released. The Japanese version was also released in Korea, unedited aside from packaging.

The game has a manga by Akira Himekawa.