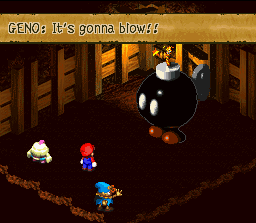 Any bomb that is at least as big as a car (either as one explosive or a cluster), is truly made to make a huge blast.

The reason is that when you have Stuff Blowing Up, it's often good to have bigger explosions. But that doesn't necessarily mean the actual bomb has to be large, especially these days with high yield explosives. Before then, huge bombs were the easiest way to make it clear the blast would be huge (in fiction and Real Life). With high yield in a large amount, the blast goes Up to Eleven.

May overlap with the Incredibly Obvious Bomb, because it's going to be hard to hide something this big.

Compare BFG, BFS, Wave-Motion Gun, and Kill Sat for other incredibly large weapons and Macross Missile Massacre, for when one explosion isn't enough.

Not to be confused with a work that flops horribly or the Giant Bomb website,

This is about the size of the bomb. If the actual explosion, or its effects, seem too big to be true for the materials of the bomb, you're probably looking at a Ridiculously Potent Explosive.

A giant Bowser-shaped bomb the characters have to be sure not to blow up.

A giant Bowser-shaped bomb the characters have to be sure not to blow up.