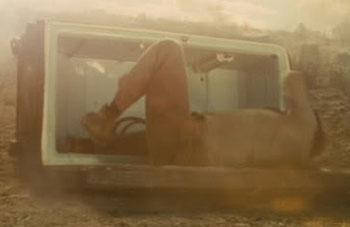 A bomb shelter on a budget.
Advertisement:

A bomb is about to go off while the hero is indoors. Where does he find refuge? Usually, either the bathtub or the fridge. Think about it as a completely different kind of Fridge Logic. This has been tested by MythBusters. Even taking cover behind a wooden table at 5' will prevent instantaneous death from the pressure wave, though death by shrapnel or other injuries are still on the table. For a similar fallacy, see Concealment Equals Cover. Of course, most of the time almost any cover will still be better than no cover — it's just that fiction often presents it as more effective than it's really likely to be.

If the explosive device is small, such as a hand grenade, the hero can throw it in a fridge. This has been tried by Mythbusters as well, and proved to be at least partially false: while the sides of the fridge offer some protection, the front and back will just turn into so much deadly shrapnel.