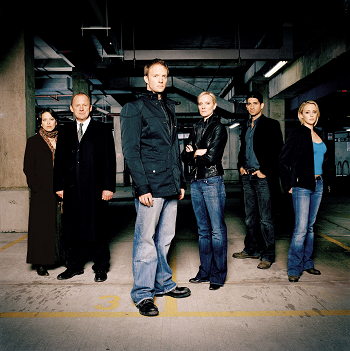 Spooks is a BBC drama revolving around a team of MI-5 officers who must juggle their professional lives, working to protect the British state from domestic threats, whilst living semi-anonymous private lives shrouded in secrecy, misdirection, and false identities. Its inaugural series won the BAFTA for Best Drama in 2003, and it was responsible for a surge of interest among Britons in joining the real MI-5, which both bemused and annoyed the organization. Influenced by John le Carré and falling distinctly on the 'stale beer flavoured' side of spy fiction, it features thoroughly-researched tradecraft gleaned from former officers and is steeped in intelligence gathering minutae concerning dead-drops, undercover operations, and suspect trailing. To maintain its conceit of anonymity, the episodes themselves have no credits, although they are available on the DVD releases and on the BBC3 "week in advance" airings.

Its uncompromising nature and morally ambiguous reputation were cemented in its second episode, which featured an MI-5 officer (set up as a main character) murdered by having her head shoved into a deep-fat fryer, which prompted hundreds of viewer complaints despite the show airing post-Watershed. Despite its gritty nature, it also strives for depth and thoughtfulness by delving deep into real-life geopolitics and socioeconomics to flesh out and humanize the threats the team faces, offering up literary allusions and symbolism such as a traitor using Coriolanus to justify his betrayal, and keeping the spotlight focused on the human cost of living in the center of a tangled web of deception and intrigue.

The show ran for ten series, from 2002 to 2011. Through it all, Sir Harry Pierce (Peter Firth) was the sole character to feature in all 86 episodes. Often a put-upon Reasonable Authority Figure struggling through a morass of ineffectual bureaucracy and murky political machinations and occasionally a badass former Cold Warrior who doesn't flinch at strangling an assassin with his necktie, Harry Pierce anchored the show through a revolving door of a cast including Keeley Hawes, David Oyelowo, Nicola Walker, and Richard Armitage.

Peter Firth returned to the role in 2015 for a film sequel named The Greater Good, which co-starred Kit Harrington.

In the United States, partly due to the racial connotations of the word 'spook' in reference to African-Americans, it was renamed MI-5. Although the series was in development before 24, it was released after it, and has similar stylistic flourishes, like heavy use of Split Screen. (Bharat Nalluri, the director of the first two episodes, which very much set the visual tone for the series, states that he independently came up with the idea of using Split Screen in a DVD Audio Commentary. The similarities between the two shows went both ways, and 24 eventually returned the favor by borrowing a Spooks plotline featuring Alexander Siddig as a terrorist of dubious reliability, whom the main characters are forced to work with.)

A Spin-Off with a Younger and Hipper cast called Spooks Code 9, aired in 2008. Poor critical reception and ratings cancelled it before a second series was made.

In 2020, David Wolstencroft said that he was up for the show to have a Stealth Sequel to tackle serious issues like gray zone warfare and cyberterrorism. He also suggested that this sequel might have a more diverse cast and be less centred around London.