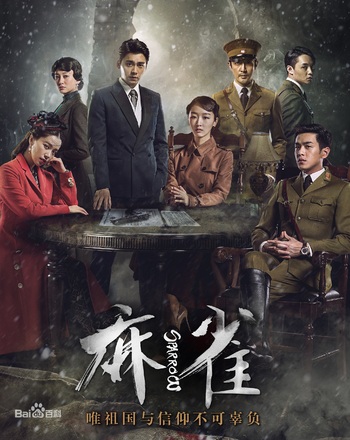 Sparrow (Chinese: 麻雀; pinyin: Má Què;) is a 2016 Chinese republican-era spy drama, starring Li Yifeng, Zhou Dongyu, Zhang Luyi, Zhang Ruoyun, Kan Qingzi, Yin Zheng, Li Xiaoran and Wang Jinsong, based on the novel of the same name by Hai Fei. Set in 1940s Shanghai, the series follows the story of Chen Shen, a communist agent with the code name Sparrow, who works undercover as the head of Operations Team 1 of the Public Security Bureau's Special Operations Department under the new, Japanese-controlled government to try and obtain information about a secret Japanese plan to destroy China.

Chen Shen (Li Yifeng) is a former barber who, as a soldier on the battlefield, once saved the life of a fellow soldier named Bi Zhongliang (Zhang Luyi), who in turn took him in as a younger brother in thanks.

Now the leader of the Special Operations Department under Japanese-occupied Shanghai, Bi Zhongliang has Chen Shen appointed as his right-hand man and the head of Operations Team 1—but despite the outwards appearance of trust, he begins to harbor deep suspicions that Chen Shen is Sparrow when he fails to capture the communist agent Prime Minister (Li Xiaoran), and the two of them play a deadly game of cat and mouse to try and outsmart the other even as the situation continues to become more complicated with the arrival of Xu Bicheng (Zhou Dongyu), Chen Shen's former student who he shares a romantic history with, and Tang Shanhai (Zhang Ruoyun), the newly appointed head of Operations Team 2, both actually a pair of nationalist spies codenamed Foxglove pretending to be a married couple to also infiltrate the Special Operations Department.

The show, with 61 episodes, can be found on Viki