Episode on a Plane 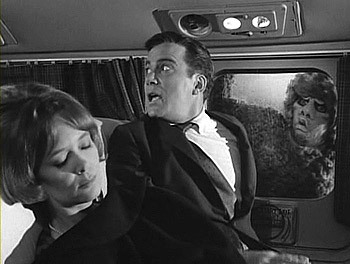 "Ooh, isn't it a great day to be HURLED THROUGH THE AIR, 23 billion feet above the Earth with — what do you know — a very, very thin shell of aluminum between you, AND A TEN MINUTE SCREAMING DROP, to an abrupt stop?"
— Red Guy, Cow and Chicken
Advertisement:

Okay, you're the writer / director / producer / executive / all of the above of a hit TV show. You want to do something different to create some tension and drama and/or humor in an episode and you don't want a Very Special Episode or a Clip Show and you don't want to spend all the money to take the whole cast and crew on location to Disney World / Hawaii / Jamaica / Springfield. A lightbulb switches on in your brain: set the episode on a plane.

This is fairly easy to do because it requires a very limited amount of sets; the limited space on a plane creates close quarters, which can create Dramatic Tension, especially if one of the main characters is deathly afraid of flying. Also, there can be accidents in a plane's bathroom, and that can help with comedic sequences. So writers/directors/producers/all of the above can get a lot of drama on a lower budget.

See also Death in the Clouds, Mile-High Club and all the other Tropes on a Plane.

A subtrope of Bottle Episode.

open/close all folders
Anime & Manga
Comic Books
Literature
Advertisement:
Live-Action TV
Video Games
Visual Novels
Western Animation
"Enough... is enough! I've had it with this motherfucking episode on this motherfucking plane! Everyone strap in!... I'm about to open some fuckin' windows."