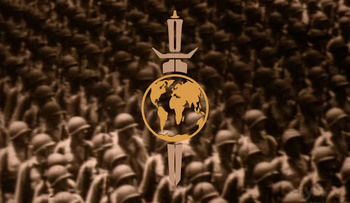 "Great men are not 'peacemakers'. Great men are conquerors!"
"Neither the east nor the west has been able to satisfy them. Alone among men they covet with equal eagerness poverty and riches. To robbery, slaughter, plunder, they give the lying name of empire; they make a desert and call it peace."
— Calgacus, Caledonian warlord on the Roman Empirenote As 'quoted' by Tacitus, the Roman historian, in his Agricola. In actuality, Tacitus probably made it up as a rhetorical means to critique the Empire.
Advertisement:

The Evil Counterpart to The Republic. The Foil to The Good Kingdom. The Shadow Archetype (or evil twin sister) to Hegemonic Empire. The Rival to The Federation. The Arch-Enemy of La Résistance. The Logical Extreme of the Rising Empire.

The Empire's defining Grand Ambition is World (Or Interstellar/Galactic/Universal) Domination. Amassing The Evil Army, it sets out to conquer all of its neighbours and be the sole superpower by force of arms. Taking cues from history, it often resembles historical empires (or empire-esque regimes) in some way. Led by The Emperor, who is usually also an Evil Overlord, Emperor Scientist, God-Emperor and/or some kind of theocratic cabal. A theocracy of a Religion of Evil will almost certainly be the Empire. The Dictatorship can also overlap with the Empire, especially if they are ruled by a clique of totalitarians.

The Empire is typically Obviously Evil, but may still attempt to represent itself as the Lightbearer of Civilization, Defender of Faith, Domain of Law and Order, The Co-Prosperity Sphere, Central State of Humankind or Legitimate Regent of Humanity. A People's Republic of Tyranny may overlap with these titles. The Empire may be genuinely highly civilized, wealthy, organized, and/or vital, or corrupt, bureaucratic, sybarite and/or ossified. It may be militaristic and imperialistic, or pacifistic and turned inwards. In nearly all instances, the Empire features an original founding polity, usually a race or nationality, who stand above and enjoy special privileges that are denied to the Empire's various subject peoples. Overall will adhere to the trope Order Is Not Good.

Of course, there's going to be some kind of Resistance movement within its borders, and small autonomous nations without who may need encouragement by the heroes to become The Alliance, especially if that means the Empire could start attacking a nation's homeland in order to transform it into a territorial posession. They may also be helped by Les Collaborateurs. There may also be one or more powers that oppose it, often good kingdoms or republics, which may or may not band together into The Alliance. The Empire is usually too strong to defeat militarily (unless the story is set in a war strategy video game), but taking down the leaders while they're instigating their sinister plan is usually enough. Or La Résistance may well turn out to be nothing but a treasonous clique to overthrow the government or dynasty and replace it with something even more cruel and brutal, or a nationalist, racist or xenophobic separation movement. The actual legal definition of an empire is basically a country or polity that gets to boss around several other ones.

If the Empire and The Federation exist in the same universe, the two are usually at war, just recovering from a war, or dangerously close to getting into one (the latter two often coincide). If The Republic is a separate entity alongside The Federation, you'll usually find them taking shots at one another prior to forming a pact against the Empire; they could've been longstanding rivals, they might view the other as the Empire, or they might've been pinned against each other by the Empire. If The Good Kingdom is in the same universe, expect the Empire to occupy it (at best) or assault it (at worst); The Good Kingdom could've been neutral ground, the original head/proposer of The Alliance, or a simple victim of the Empire's bid for dominance. If the Empire is part of The Alliance, you can make a good bet for it being the Token Evil Teammate.

Note that just being called an Empire is not sufficient to qualify a nation for this trope. There's many stories, especially in the Heroic Fantasy and Historical Fiction genres, with polities called "empires" that are less overtly antagonistic. These types of empires may be better described as an expansionist monarchy, a culturally dominant Hegemonic Empire, a militaristic federation, a nationalist republic, or a more centrally controlled alliance.

Weakened or weakening versions of the Empire often become Vestigial Empires. If the Empire has been overthrown or mostly overthrown but what's left of it is fighting to get back into power, it's The Remnant. One of its provinces may be a Voluntary Vassal, rather than a conquered one. The Empire tends to have its Standard Evil Empire Hierarchy.

Suffice it to say that the Trope Namer is the Imperium Romanum. Other than that, No Real Life Examples, Please!. Most Real Life historical empires have fallen under the Hegemonic Empire class; infamously cruel empires tend not to last very long in the real world.

See People's Republic of Tyranny when The Republic or The Federation acts like an Empire despite not technically being one itself. These examples often have The Generalissimo as its ruler instead of the Emperor.