Literature / Hands Held in the Snow 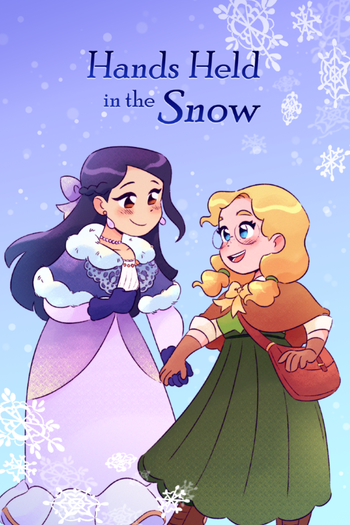 "It was... something at first sight."
Advertisement:

Hands Held in the Snow

is a Yuri Genre / Young Adult Web Serial Novel written by Thedude3445, author of ATL Stories From The Retrofuture, with art and illustrations by Mikayla Buan, character designer for The Acorn Princess.

The story's about a girl who meets a girl and the romance that forms between them. Beatrice Ragnell is an ace student who is studying to become a priest and help save the world. Emi L'Hime is a wealthy bureaucrat's daughter who resents her family for keeping her in an engagement to a noblewoman she's never even met. The two meet at the library, bond over books... and that's where their story begins. At the same time, though, their home city of Balarand has been conquered by The Empire, and there's a lot of tension rising. That's not going to stop them from falling deeply in love with each other, though.

It's a Slice of Life Queer Romance story filled with Coming of Age drama and some serious issues about a military occupation by a foreign government, but it is also an adorable, WAFFy Slice of Life story about two young women having a great time together.

The story's posted on its own site

and on Royal Road

too. It updates two times a week.

"Whatever Emi and Beatrice felt by meeting each other’s looks, it was no fleeting moment. Was it love at first sight? I wouldn’t say so. But… It was… something at first sight."