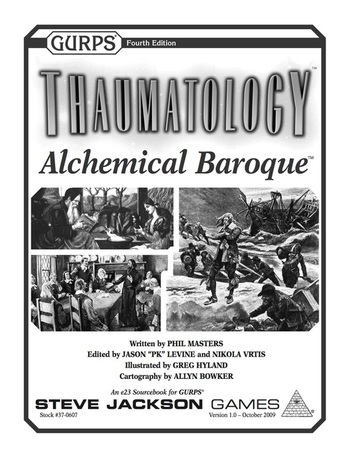 It’s alchemical because the magic of the setting has a formal, quasi-scientific flavor, and Baroque because stories set here should have a sense of style drawing from history’s Baroque period — a fever dream of the world as of the early 18th century.
— From the book's introduction.
Advertisement:

GURPS Thaumatology: Alchemical Baroque is a short (24-page) setting/worldbook supplement for GURPS 4th edition by Phil Masters; the full title indicates that it is associated with the larger supplement GURPS Thaumatology, using the extended rules for magic in GURPS from that book. The setting it describes was originally depicted in a chapter of GURPS All-Star Jam 2004, a 3rd edition supplement; the material from there is expanded and updated for the newer rules here.

The setting is the "Known Lands", a fantasy land loosely but openly based on Europe and its environs in the late 17th and early 18th centuries — the early part of The Enlightenment period. Hence, the setting attempts to avoid most of the tropes of the Standard Fantasy Setting, instead drawing on traditional Fairy Tales combined with alchemy, early science, musket-and-bayonet warfare, and pre-industrial technology. Games run in the setting can range from clever peasant heroes tricking dangerous ogres to subtle tales of international intrigue.

Tropes Known in These Lands: