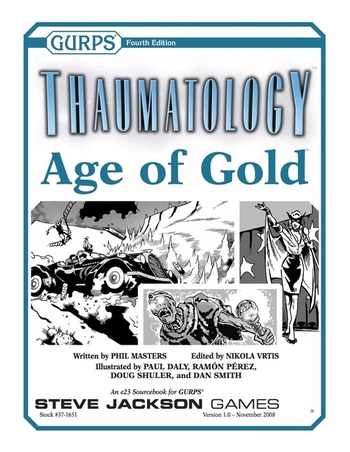 Not everything is known as yet, and some of the unknown regions of the planet are stuffed full of strangeness and deathtraps. Supernatural power exists and can very definitely be used for evil as much as for good. Meanwhile, even in the most “civilized” corners of the known world, utterly mundane evils are emerging that threaten to drag the planet down into darkness.
— From the book.
Advertisement:

GURPS Thaumatology: Age of Gold is a setting/worldbook supplement for GURPS 4th edition by Phil Masters; the full title indicates that it is associated with the larger supplement GURPS Thaumatology, using the extended rules for magic in GURPS from that book. The setting is an Alternate History version of the Pulp-era 1930s, in which magic, which existed mostly in the shadows throughout history, is newly resurgent — and is empowering pulp-style heroes, adventurers, and master villains. The title refers to both the historical period — at the start of the Golden Age of comic books — and the fact that Alchemy, a key feature of the setting, was partly about trying to manufacture gold.