Our Ogres Are Hungrier 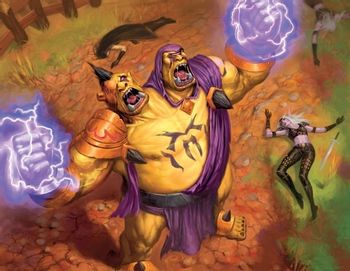 Two heads are hungrier than one.
"After all, ogres appreciate succulent meat as much as the next ten-foot tall killing machine."
— Warhammer Fantasy Battle: Ogre Kingdoms
Advertisement:

Ogres? Man, I've got a Description Of Our Ogres Are Hungrier Here! It's got a +9 against ogres!

Ogres are a staple of fantasy and fairy tales, and so appear in many forms. Most have the following traits in common:

Ogres in folklore were portrayed as child-eating monsters who sometimes had magical or otherwise supernatural powers (the ogre from "Puss-in-Boots" is a classic example). Unlike modern depictions of ogres as lumbering primitives, fairytale ogres often lived in castles, wore fine clothing and owned wondrous magical items... while still being unrepentantly evil monsters who ate children like popcorn.

In fantasy works, ogres tend to occupy a mid-level spot on the Sorting Algorithm of Evil of evil humanoid foes, generally appearing after orcs but before giants.

See also Our Orcs Are Different (their names share the same linguistic root — they are believed to stem from Orcus, a Roman god of the underworld), Our Giants Are Bigger, All Trolls Are Different, and Smash Mook.

Not to be confused with trolls. Even though they can often be indistinguishable in fairy tales (when English/French tales reached Scandinavia, "ogre" would usually be translated as "troll"), trolls are generally a type of fae rather than a generic evil monster. Sometimes shares international space with oni.

The ogres of Warhammer sing about their favorite meal ... people!

Alternative Title(s): Our Ogres Are Different

The ogres of Warhammer sing about their favorite meal ... people!