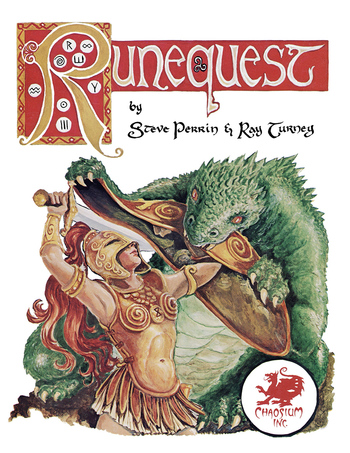 RuneQuest 2nd edition cover
"Violence is always an option."
"There is always another way."
— Orlanth and Ernalda, patron gods of the Orlanthi
Advertisement:

RuneQuest was published by Chaosium in June of 1978 note its development began on July 4th in 1976, making it one of the oldest tabletop Role-Playing Games. Among other things, it introduced an experience system that replaced levels (as in Dungeons & Dragons) with skills that increase when successfully used (Traveller replaced levels with skills first, but they didn't increase with use). It also introduced hit regions instead of general Hit Points and did not use Character Classes, which removed weapon and armor use restrictions.

The original RuneQuest was set in the Constructed World named Glorantha created by Chaosium co-founder Greg Stafford in 1966. The setting shares many tropes in common with other fantasy worlds, despite Stafford's insistence that it was more inspired by studies in folklore than popular fantasy.

The history of the game is somewhat convoluted, with many offshoots. The first edition debuted as a 120 page book at the Origins Game Convention in 1978, and sold over 1,000 copies. It was reworked into a 2nd edition in 1979, which went on to sell over 10,000 copies by 1981. The most popular version of the 2nd edition was the boxed set (which were popular at the time). It included a pair of starter adventures (Apple Lane and The Rainbow Mounds), a set of dice, and a stripped down quick-reference for new players called Basic Role-playing along with the main rulebook, which was given all new typesetting and error corrections. It is commonly considered the definitive edition.

After that, Chaosium, needing money to expand, sold the rights to the name to Avalon Hill, and co-wrote the subsequent 3rd edition, but retained the rights to the Glorantha setting and editorial approval of all use of the world (the third edition, originally published in 1984 as a large box set, included both Glorantha and an alternate generic fantasy Europe setting). After some time, the game went dormant (a planned new edition in 1994 was canceled mid-development). Stafford left Chaosium in 1997 after unrelated financial issues, taking the rights to Glorantha with him (he retained a large ownership stake in Chaosium, though). Stafford formed a new company, Issaries Inc., to create an entirely different, more narrativist game called HeroQuest in conjunction with the publisher Moon Design Publishing, and eventually acquired back the rights to the RuneQuest trademark from Avalon Hill (which had wound up owned by D&D publisher Wizards of the Coast) in 2004.

In 2005 Stafford licensed the RuneQuest name to Mongoose Publishing to create a new version, published in 2006. It cloned the basics of the rules but didn't use the original copyrighted wording (which had reverted to Chaosium). This version was placed under the Open Gaming License. A heavily revised Mongoose edition, written by longtime RuneQuest fans and game designers Lawrence Whitaker and Pete Nash, was published in 2010, and was far better received than the first Mongoose edition. However, Mongoose's license was not renewed, and in 2012, a new company formed by Whitaker and Nash, The Design Mechanism, picked up the license and published a 6th edition of RuneQuest, an expansion of the second Mongoose edition. Moon Design Publications purchased all of the rights and trademarks for RuneQuest and Glorantha from Stafford in 2014, and maintained the license at first. Shortly after, however, ongoing financial issues at Chaosium led Greg Stafford and Sandy Petersen (who collectively owned a majority ownership) to retake control of Chaosium and arrange a merger with Moon Design, whose management team would run the combined company. With the trademark and copyright for RuneQuest once more under its control, Chaosium developed a new edition of RuneQuest, called RuneQuest: Roleplaying in Glorantha, which appeared in 2018.

on Kickstarter in 2019 for Glorantha the Gods War, an asymmetrical strategy game about gods battling it out.

Since 1980 Chaosium has used versions of the core RuneQuest rules for other games like Call of Cthulhu, Stormbringer, and the ElfQuest RPG, and many, many more; these rule variants are now collectively known as the Basic Role-Playing System (BRP), which has in fact sometimes been available as a generic ruleset. The fantasy world of Glorantha is also the setting of the video games King of Dragon Pass and Six Ages, the webcomic Prince of Sartar, and the boardgame Khan of Khans. Although the RuneQuest title has occasionally been attached to games with other settings, it has always been and remains closely associated withe Glorantha, and the vast majority of the tropes listed below actually relate to Glorantha rather than BRP; hence, they could in fact also be considered to relate to HeroQuest and any other games and fictions which use that setting.