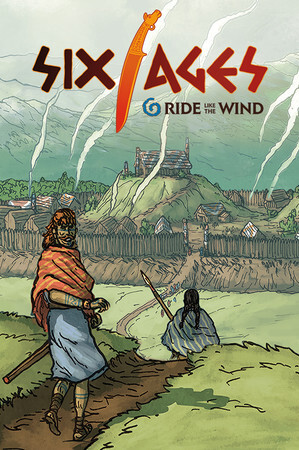 "We have granted many mercies. Now may the gods grant us one."
Advertisement:

Six Ages: Ride Like the Wind is the long-awaited follow-up to the cult classic King of Dragon Pass. It is set long before the earlier game, in the mythic Storm Age, and deals with an entirely different group of people — the Riders, or Hyalorings.

The sun god Yelm is dead, and the mighty empire your people once lived in is covered in ice. Your clan has escaped that fate and must now make a home in a new land, populated not only by fellow Riders but by their Wheel cousins and the barbaric Rams—worshippers of Orlanth, Yelm’s murderer.

Ride Like the Wind is the first of a potential six games, which will allow the player to continue their clan’s story through six ages of Gloranthan history. It was released for iOS in June 2018, and was ported to PC and Mac on October 17, 2019.

The second game, Lights Going Out, is currently in development for iOS. A third game, The World Reborn, is also tentatively planned.