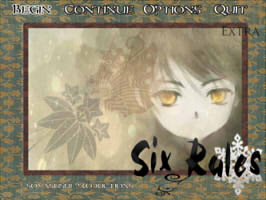 He never listened, because he was a fool.
"But we hide everything, because we are kind. Hiding in a fog. Taira no Yu-kiri."
Advertisement:

Hung on a piece on thread in the foyer, a bamboo scroll read:

1) You must not let any strangers into the house. Preferably not even the forest where we reside in.
2) If you spot any strangers loitering around the property, alert us immediately.
3) You may converse with strangers as a gesture of friendliness, but never tell them where the house is located. We are hiding for safety, after all.
4) Don’t accept things from trespassers. Don’t give things to trespassers, either.
5) Never, I repeat, never talk to those of the Taira family.
6) Got it? Don’t trust the Taira Clan.

Minamoto no Ryouji, a 12th-century Japanese boy of the Minamoto clan read those rules, and knew them all by heart. Never in his life would he even dream of breaking even one of them. That is, until that one day he met a girl named Yuki in the heart of the winter fields.

Six Rules is a short Ren'Py-based Visual Novel by Soyasushi Productions about a little boy, a little girl, and a spiritual journey through a snow-strewn forest of ancient Japan. Except it’s not.