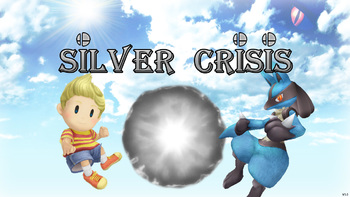 From Left to Right we have: Lucas, Silver, and Lucario.
Advertisement:

, leader of the Smash Bros. Machinimator Group Virtual Smash. The story initially started as a Super Smash Bros. Brawl Machinima created by him, but due to life complications, he decided to move the story to a Visual Novel Format so he could finish it and give the fans closure.

The Story begins with Lucas living his everyday life with his best friend Ness, who taught him how to use his Psychic Powers. Suddenly, a man named Ganondorf appears with a Silver Lucario, both of them overpowering Lucas and Ness, and kidnapping Ness in the process. They nearly finish off Lucas, when a Blue Lucario shows up and rescues him. The Silver Lucario proceeds to use Ness’s Psychic power to bridge the many worlds across the Nintendo-verse, involving everyone from those worlds in his plans. The Lucario that saved Lucas then informs him that the Silver Lucario was created from himself, and that he is going to find and put a stop to him before he can harm anyone else. Lucas, wanting to repay his debt to his best friend who changed his life, resolves to save him from Silver’s clutches, despite how weak he is.

Be warned that the tropes below contain spoilers for the Nintendo Games Mother 3 and Fire Emblem: Path of Radiance.