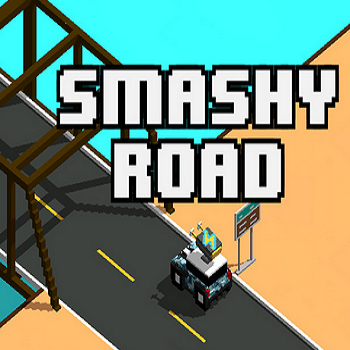 Smashy Road is a 2014 Indie Game by Bear Bit Studios, developed for iOS and Android.
Advertisement:

Remember when you were addicted to Crossy Road, which was basically Frogger with more content added? Well imagine a Hot Pursuit game in the style of Frogger with the addictivity and the diverse content as well. Well, you got yourself Smashy Road.

The game involves you riding a speeding car on a simple road and try to move left and right to dodge incoming cars and trees and stay away from the police while collecting coins. You get to spend the coins you collect to get new cars.

It got a sequel in 2015 under the name Smashy Road: Wanted, where you now have to travel around a city and a desert instead of a simple road. Moreover, you get stars, which brings harder police cars and put blockade on roads, as you progress with the game. Then, there was Smashy Road: Arena in 2016.

It also has a 2015 Spin-Off called Wrecky Ball, which involves you trying to ride a vehicle and smash everything with your wrecking ball (and some variations depending on the vehicle) while avoiding obstacles as well.