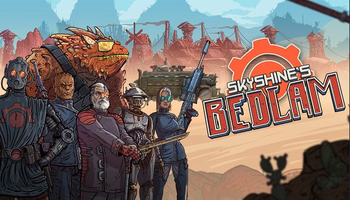 Skyshine's Bedlam is a Roguelike / Turn-Based Tactics hybrid, developed by the Skyshine Studios and set in an post-apocalyptic world inspired by equal parts Mad Max and the pulp sci-fi of the 1970s.
Advertisement:

In it, the player is placed in charge of an enormous Dozer as it escapes the city of Bysantine with hundreds of passengers inside. The city is ruled by the tyrannical King Viscera, but it is nevertheless a safe haven when compared to the horrors of the wasteland outside. The latter is wracked by the numerous natural disasters, while the majority of the settlements belongs to either the Rogue A.I., the Mutants who abandoned humanity several planks of the evolutionary ladder ago, or even once-ordinary humans who "went borg" with cybernetic enhancements. The regular humans are in the minority, and practically all are inside the Viscera-controlled Marauders. On the other side of this hell, however, is the legendary Aztec City, a supposed Utopia which where you must safely deliver your hundreds of passengers.

The game was originally funded

on Kickstarter in 2014, as "Bedlam". However, it turned out there was already a game with that name in development, so Skyshine Games had to clarify the title before releasing in on Steam in September 2015. The following year, they updated it to "Redux".

See Convoy for another Kickstarter-funded 2015 roguelike set on a Post Apocalyptic desert planet.