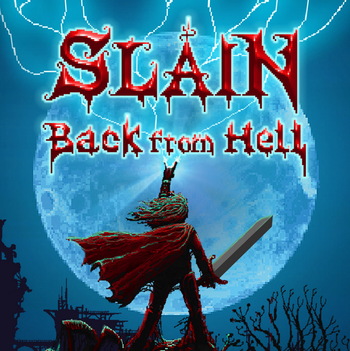 Slain! is a Hack and Slash Platform Game set in a fantasy world, and with a heavy metal aesthetic. The player controls Bathoryn, a Gothic hero of a bygone age, who was reawakened from his grave in order to slay Lord Vroll, a villain who has conquered the land with heinous monsters, and now has his six lords rule the corrupted lands from their six towers.

It was developed by Witch Brew Studios, got funded

on Kickstarter on March 27th, 2015, and was released on PC through Steam exactly a year later.

This initial version of the game was very poorly received, mainly due to its controls; undeterred, the project head went back and spent several months working on Slain!: Back from Hell, and Updated Re-release that fixed the most important issues and was met with a much warmer reception. The Back from Hell version was then ported to PS4 on September 20th, 2016, to Xbox One on October 21st 2016, to Playstation Vita on November 22nd, 2016 and to Nintendo Switch on December 7th, 2017; the last version was unfortunately a Porting Disaster at launch.

The creators later renamed themselves to Steel Mantis, and released a 2019 sci-fi game in the same universe as Slain!, titled Valfaris.