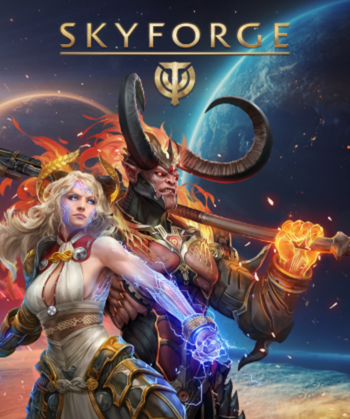 Skyforge is a Free-to-Play Science Fantasy MMORPG developed by the Allods Teamthe, the same people that made Allods Online, in collaboration with Obsidian Entertainment.

Set in the world of Aelion, which is protected by its gods, the twist is that in this world anyone can potentially be an immortal, they just wouldn't know it until they "died" for the first time, and the "gods" are only the most highly revered of those immortals. The custom player character's journey begins with discovering their immortality and progresses on to their rise to godhood.

The game has a total of 13 classes so far, three of which can be freely switched between from the start. The starting classes are Paladin, Cryomancer, and Lightbinder. In order to further develop a class, the player must obtain a resource called Sparks, which can be spent on unlocking nodes in the class talent tree, called the Ascension Atlas and can be obtained by completing adventures (dungeons), PvP battles or questing in open regions. Once a certain point is reached in the tree of at least one of the starting classes, the player gains access to the second level of the Atlas, which is the inter-class level. From there, players can further progress towards any of the other classes, which are Archer, Necromancer, Slayer, Knight, Alchemist, Witch/Warlock, Monk, Gunner, Berserker, and Kinetic. The game only allows one character per account because classes, once unlocked, can be switched to at any time outside of active combat at the push of a button. Every aspect of the character's appearance can also be re-customized so really there's no danger of Alt Itis setting in.

The combat falls squarely into Action RPG territory with cross-hair targeting, dodge rolls and combos, and all 13 classes having significantly different playstyles. The game does not, however, have a vast open world like World of Warcraft, instead utilizing a global map at the Divine Observatory from which the player can choose what adventure to embark on and be teleported directly to it. Adventures come in several varieties but primary among them are Squad adventures(meant for 1-3 players), Group adventures(meant for 5 players) and Regions, which are most reminiscent of other MMORPG due to their larger size and the multitude of other players running around in them. On top of that, the player can eventually start their own religious order since you wouldn't be much of a god without worshippers. They can then build their following, acquire adepts to send on various missions, and unlock provinces in which to build chapels, albeit the in-game representation of that is little more than a passive stat increase and resource gain.