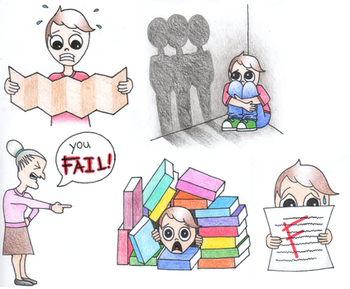 In fiction, the freshman yearnote Freshman year varies from country to country; in most areas of the United States, it's the ninth grade for High School. College doesn't use grades, but the first year of college is referred to as Freshman year of education at a secondary or tertiary school is a struggle.

The main reason is that the character is new at the school, which undoubtedly is a different environment from their earlier school, and may be scared because of their expectations for their first year at a higher school. Another reason for their fears is more studying, meaning that the character has less time devoted to subjects that they enjoy. Then there is socialization, like peer pressure and love interests, which begin to be relevant in freshman years, mostly for middle and high school students, as hormones start running high. They will usually face bullying, usually from a Jerk Jock for males or an Alpha Bitchnote  and also likely her Girl Posse, especially her Beta Bitch for females. Underclassmen might also face various forms of hazing; for some these are silly rites of passage, but in extreme cases, they veer into abuse.

They also tend to be at the bottom of whatever social hierarchy in general, especially when they may have been at the top wherever they're coming from, e.g. the biggest kids in middle school become high school freshmen, and so on, thus losing their popularity in their new stage of education.

Can be Truth in Television. Some freshmen may be anxious with more schoolwork, as well as love interests and peer pressure, and yes, there have been many cases of bullying and hazing of freshman students, particularly from upperclassmen.

In fiction at least Kindergarteners have been known to be nervous about going to "big school" for the first time and not knowing anybody there, in which case they might be reassured about an older sibling being at school with them if they have one.

May have some overlap with Wake Up, Go to School, Save the World, especially if the certain freshman student is also a superhero. Might involve a First Day of School Episode, though Freshman Fears can happen throughout the student's first year. Often this involves Everyone Meets Everyone or Welcome Episode, where what goes on to be a long-standing ensemble throughout a school story comes together when the characters are freshmen due to these struggles.

Compare with Naïve Newcomer and College Is "High School, Part 2". Also compare with both Senior Year Struggles, which is about characters in their last year of secondary or tertiary education, and Second Year Protagonist, a trope about characters who are in their sophomore year, which is employed mainly for the sake of enabling writers to explore the topic of being a student while preventing avoiding certain issues pertaining to freshmen (such as being new) and seniors (such as graduation) from affecting the plot.