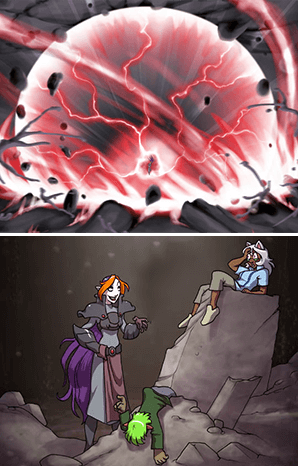 "The spell only affects one creature."
"That's... totally logical."
[Warning] Images of this skill are just a reenactment.
— Description of the Big Bang skill, Disgaea 5: Alliance of Vengeance
Advertisement:

A Slap-on-the-Wrist Nuke is an attack that's undeniably powerful, but far less damaging than it should be.

Partner in crime to the Overly Long Fighting Animation, and with the help of cousins Made of Iron and Friendly Fireproof, this trope broke into Awesome, but Impractical's house and stole the Awesome, but left the Impractical. You see, a Slap-on-the-Wrist Nuke is still a solid attack you'd gladly use on an enemy... it's just much, much less powerful than it ought to be, considering what it actually entails. When You Nuke 'Em, you may find this diminishing your triumph, if only a little.

Using a Summon Magic Monster that destroys the moon to rain fiery Death from Above on enemies, or a Wave-Motion Gun fueled by consuming galaxies, and the nine-hundred-megaton Colony Drop that won't scorch your lawn but will disintegrate that Money Spider... only mildly damages the Final Boss. Also, expect any stellicidal attacks or planet-busting techniques to be polite enough to rebuild the destroyed real estate after the CGI is done.

A particularly noticeable form of Gameplay and Story Segregation.

Explanatory rule of thumb: If dropping an asteroid the size of Russia on the Boss does less damage than slashing him once with the Infinity +1 Sword, which has the same animation as using the starting stick, you've fallen headlong into this trope.

Sometimes it's mostly because of programming issues. An attack may indeed be programmed to be powerful; but due to a problem with calculating the formula or some other factor, it's severely weakened.