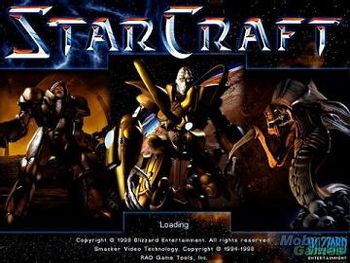 Only Blizzard could reinvent the RTS.
— Ubisoft's (StarCraft 's distributor in France) Tagline for the game.
Advertisement:

Warcraft... IN SPACE!note It's much more sophisticated.

Initially released in 1998, StarCraft took the Warcraft style of gameplay that had made Blizzard famous and adapted it to a 26th century setting. It is perhaps most notable for being one of the best-selling and most widely-played computer games to be played competitively.

As the story opens, Terran civilization is embroiled in a civil war between the ruling Terran Confederacy and the rebel Sons of Korhal when Zerg infestations begin appearing on several worlds. As the Zerg quickly overtake the unprepared Terran outposts, Protoss battle fleets begin attacking the infected worlds as well, destroying all life on them to prevent the infestation from spreading. Arcturus Mengsk, leader of the Sons of Korhal, learns that the Zerg are attracted to psychic energy, and begins deploying "Psi Emitters" into Confederacy bases to bring down Zerg attacks upon them. By doing so, he ultimately destroys the Confederate capital of Tarsonis and takes control of the Terran government, declaring himself Emperor, but his lieutenant — former Confederate Ghost Sarah Kerrigan — is lost in battle and becomes infested by the Zerg. In her new form, she lends her psychic powers to the Zerg's already impressive numerical strength and turns it against the Protoss, managing almost to conquer the Protoss homeworld of Aiur before two warring Protoss factions, the Khalai and the Dark Templar, join forces with a group of Terran exiles to destroy the Overmind.

Three Expansion Packs, Brood War, Insurrection, and Retribution were released in 1998. Brood War added new units and a continuation of the campaign, wherein the Protoss have to escape their Zerg-overrun homeworld, a new Terran faction invades the sector and the remaining Cerebrates attempt to resurrect the Overmind. Amidst all of the action, Kerrigan swoops in time after time to ally herself with everyone in turns, pitting them against each other and eventually making herself the Queen Bitch of the Universe by beating her weakened enemies in battle. Insurrection and Retribution were not made by Blizzard, not widely available, and generally regarded as Canon Discontinuity. Considering they don't really affect the canon and just focus on minor characters doing random stuff, it doesn't matter.

StarCraft shipped with a map editor that was extremely versatile for its time, giving the user control over almost all of the game's mechanics. Members of the community have produced maps easily on par with those included in the official campaign, even including voice-overs in some examples. StarCraft was also one of the first games to utilize Battle.net, Blizzard's proprietary multiplayer matchmaking system, which streamlined a process that previously had required using third-party clients, and created a climate that has kept StarCraft popular to this day.

On March 26, Blizzard announced an Updated Re-release under the name StarCraft Remastered, which was released on August 14, 2017. In July 2019, Blizzard released StarCraft Cartooned, an optional reskin of Remastered that makes the game into a cartoonish version of itself, visually inspired by StarCrafts, but with identical gameplay.

A Game Mod Fan Remake of the game for StarCraft II called Starcraft Mass Recall was made that has its own page.

This series also has its own Shout-Out page here. For more information on professional teams and their members of StarCraft 1 and 2, look under real time strategy folder in Professional Gaming.