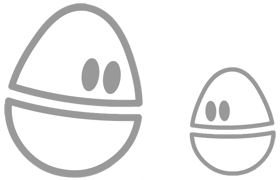 When come back, bring pie. Wanker.

The Everyday Happenings of Weebl (And Sometimes Weebl's Friend Bob), or just Weebl and Bob for short, is a Web cartoon produced by British animator Jonti "Weebl" Picking and shown on the website Weebls-Stuff.

The title characters are two egg-shaped, pie-loving, near-unintelligible fellows, modeled after the famous "Weeble" toys, who get into various odd adventures, usually involving some scheme or quest to get pie, which they rarely ever succeed in doing. Other characters include Weebl's bovine rival Wee Bull, an erudite Monkey who is probably the smartest character in the show despite not being toilet-trained, and Hairy Lee.

Picking is also responsible for a number of tunes that have gone Memetic Mutation in the intervening years. Badger Badger Badger (Mushroom Mushroom)

is probably the one you're most familiar with, but he also did the "Magical

, not to mention a bunch of others which we will not bother listing because your brain would collapse under the sheer stuck-in-your-headness unleashed thereby. (Picking being Picking, he lampshaded this eventually

) and On The Moon (found here

The Weebl and Bob cartoons started on Newgrounds, and were also aired on MTV in the United Kingdom, under the title "Wobbl and Bob" due to Playskool's trademark on the "Weebles" toys on which the characters may have been based.

Picking also does livestreams on Twitch every now and then, follow him here