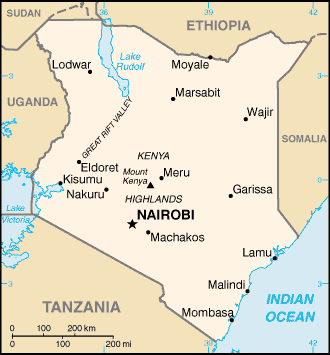 Forget Norway!
We've got the lions, only in Kenya...
Come to Kenya, we've got lions...
—Weebl and Bob summarise the key appeal of Kenya

The Republic of Kenya (Swahili: Jamhuri ya Kenya) is a democratic country in East Africa with a population of 38 million. Its primary languages are English and Swahili. Internationally, it is best known for its wildlife reserves, traditionally hunted with rifles and now hunted with cameras, although there are growing concerns about dwindling populations of the country's wildlife.

Though it varies depending on where you are, Kenya is warm with a largely tropical climate and regular rainy seasons. The highlands have long been prized for their quality as farmland, but only 8% of the total country is thought to be arable. There's a huge mountain called Mount Kenya, which generally has snow on its peak all year round, although climate change is eroding the glaciers there fairly rapidly.

Formerly a British colony (when it was pronounced Keen-ya, as opposed to the current Kehn-ya), it became independent in 1963. The British used a method of rule called "indirect rule," meaning they chose an ethnic group to rule for them by proxy. The effect of pitting the ethnic groups against each other continues today, and is the root for a lot of political tension. Disputed elections in 2007 saw a large-scale outbreak of violence that led to over a thousand deaths before a settlement was reached, creating a coalition government. The power-sharing arrangement pacified the two major ethnic groups, the Kikuyu and the Luo.

Kenya has had problems with drought recently, with some blaming mass deforestation of the Mau forest for the lack of moisture.

O God of all creation
Bless this our land and nation
Justice be our shield and defender
May we dwell in unity
Peace and liberty
Plenty be found within our borders.
Let one and all arise
With hearts both strong and true
Service be our earnest endeavour
And our homeland of Kenya
Heritage and splendour
Firm may we stand to defend.
Let all with one accord
In common bond united
Build this our nation together
And the glory of Kenya
The fruit of our labour
Fill every heart with thanksgiving.
Government Miscellaneous