Series / As Time Goes By 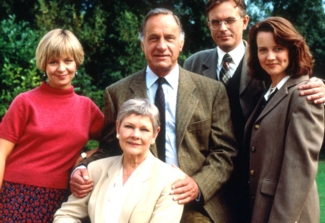 As Time Goes By follows the somewhat unusual love story of Jean (Judi Dench) and Lionel (Geoffrey Palmer), two former lovers who reunite unexpectedly thirty-eight years after their romance during The Korean War. In the opening episode, Lionel has returned to England from a coffee plantation in Kenya and is seeking a secretary to help with his autobiography. He requests one from the "Type for You" secretarial agency, not realizing that it is run by his old flame Jean, who by this time is widowed and has a grown daughter, Judith. After Lionel asks Judith on a date and the two main characters finally meet, Lionel and Jean both realize the other's identity. We find out that their relationship ended not from any loss of affection, but as the result of the post office losing a letter that Lionel had sent to Jean. Although they part on good terms never intending to meet again, they are thrown back together once again and eventually fall in love.
Advertisement:

Although they are eventually back where they started, Lionel and Jean's romance gets off to a slow start, with each being the object of youthful affection during the first series, he from her daughter Judith and she from his publisher Alistair. At the conclusion of the first series, Lionel and Jean share their first kiss (again), by series three — after some hilarious miscommunications — Lionel has moved into Jean's house, and they marry the following series. Along the way, Lionel writes a mini-series about their romance for American television which fails spectacularly (not through any fault of his own), Jean opens a second branch of her secretarial agency and eventually retires, and the two acquire a country house from Lionel's somewhat unconventional father.

The series also focuses also on the adventures of Judith, Jean's daughter, Sandy, her secretary who eventually comes to live with them, and Alistair, Lionel's wealthy and flamboyant publisher. The three "young people", as they are sometimes called, provide much preoccupation for Jean, who enjoys managing their love lives, and much hilarity for the audience. Judith and Alistair, after being on and off for nine years, finally get married in the final series of the show. Sandy, who moves in with the Hardcastle/Pargetter clan after a bad break-up, starts dating a policeman named Harry, whom she eventually accompanies to Canada. Adding extra sparkle to the show are Lionel's father and stepmother Rocky and Madge, an older couple, though in their 80s, constantly remaining young at heart, and their housekeeper Mrs. Bale, a Mrs. Danvers-esque figure who is somewhat obsessed with the shipping forecast.

The series lasted from January, 1992 to December, 2005. It consists of nine seasons of 30 minute episodes and two reunion specials. Came twenty-ninth in Britain's Best Sitcom.