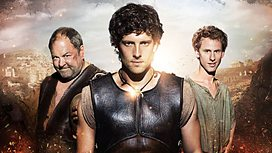 A BBC1 series that began 28 September 2013 as a replacement for Merlin, created by Howard Overman and sharing some of the same production team. However, the Jason seen here is not he of the Argonauts fame until the series finale indicates otherwise, but a young man from the 21st century who is deep-sea diving, trying to find out about his missing father, when he abruptly vanishes and re-emerges in a pre-sinking Atlantis. Quickly making friends with Pythagoras and Hercules, they decide to become soldiers for hire to survive in the world Jason now finds himself in.

Only lasted two seasons due to poor ratings.