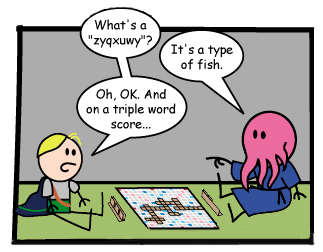 The downside of playing Scrabble against a Starfish Language speaker.
"K-W-Y-J-I-B-O. Twenty-two points, plus triple-word score, plus 50 points for using all my letters. Game's over, I'm outta here."
— Bart Simpson, The Simpsons, "Bart the Genius"
Advertisement:

The cast is sitting around playing Scrabble (or some obvious knockoff) when someone plays a nonsense word and gets called on it. The cheater will be forced to "prove" it's a real word by giving its definition.

If the writers know something about Scrabble, expect the word to contain copious amounts of the high-scoring consonant tiles (J, K, Q, X, and Z) or a full rack of seven tiles. Let's ignore the fact that actual English-language Scrabble sets

only contain one each of those tiles (the game's wildcards, the two blank tiles, are worth no points on their own). A similar game, Bananagrams,

contains two of each of those consonants.

Usually, but not always, a sitcom trope.

A Rules Lawyer may note that even according to official Scrabble rules, players are still technically allowed to play such words — you just have to pay a points penalty if your opponent challenges them. Also, contrary to the trope, asking an opponent to actually define a challenged word is considered bad form in high-level play; tournament Scrabble players are too busy memorizing huge lists of allowed words to bother with trivial things like what the words mean. (Case in point: the French world championship was won by a man who didn't speak French

.) It also doesn't have to specifically be Scrabble they're playing; it could also be Boggle, the aforementioned Bananagrams, Bookworm Adventures, or whatever.

Compare Boggles the Mind, when people use real words that reflect what's on their mind.

The Comp-U-Comp supercomputer manages to make Wipqozn an actual word in order to win at Scrabble against Dilbert.

The Comp-U-Comp supercomputer manages to make Wipqozn an actual word in order to win at Scrabble against Dilbert.