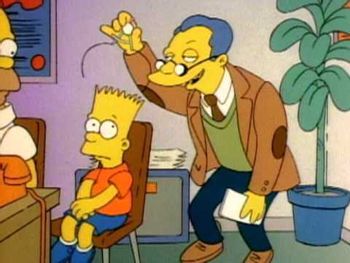 "Bart, we'd like you to try a kind of school that doesn't rely on grades and rules and bells and buzzers. A school without walls, where you do as much or as little of the assignments as you feel you need to. Does that sound good, Bart?"
Advertisement:

Bart cheats on an intelligence test by swapping papers with class nerd Martin Prince, and soon finds himself transferred to an elementary school for genius kids, who don't see Bart as one of them, while Homer thinks otherwise and bonds with him.