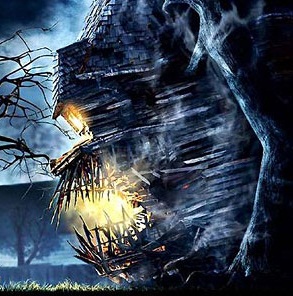 When a house is alive and has a mind of its own, and can think and act independently. The reasons for this can vary from the house being haunted, being a monster by itself, to the house being robotic. The house may try to kill its owners or may be very helpful with chores. It's usually able to speak, but it doesn't have to.

If it's robotic it may have been made to serve its tenants and will make its owners breakfast and dinner and open doors for them. It can also go horribly wrong. Which it does a lot.

Different from Smart House in that it must be completely sapient and it doesn't have to be AI that makes the house sapient.

In the case that the house is haunted, whatever is haunting the house must be one with the house. They cannot simply inhabit the house.

Compare with Sapient Ship and Base on Wheels. Subtrope of Genius Loci. AI examples may overlap with Smart House.