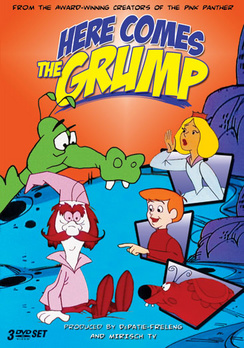 Here Comes the Grump is a De Patie Freleng Enterprises Saturday Morning Cartoon that ran in 1969/70 on NBC. Princess Dawn, her Non-Human Sidekick Bip, and ordinary Earth teenager Terry Dexter are being chased by the villainous Grump and his klutzy Dragon. Each episode takes them to a new locale, where the heroes enlist the aid of the locals to try and get The Grump off their trail and maybe learn where to find the magical crystal key that will lift the Grump's spell of gloom from Princess Dawn's kingdom.

The series has No Ending, though see the note below as to how rumor has it it was supposed to end.

A Mexican-British CGI movie based on the series was released in the year 2018, under the name A Wizard's Tale.

Not to be confused with the Adam Ant song.