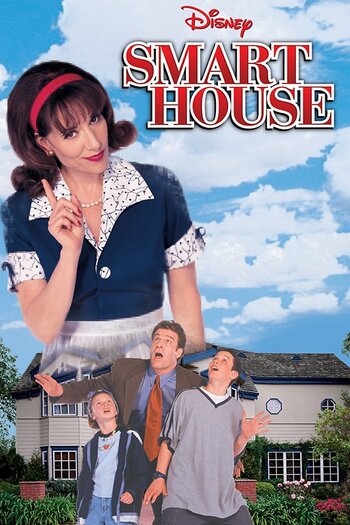 Jump! Jump! The house is jumpin'!
Ben: You can't be our mother, PAT! You're not real!
PAT: So?
Advertisement:

It's everyone's worst nightmare. Your technology turning against you. Your family trapped in an automated house with you being subject to the will of an artificially intelligent computer.

No, it isn't that scary! It's actually another 1990s Disney Channel comedy movie! 1999's Smart House (directed by LeVar Burton) revolves around a teenager named Ben, played by Ryan Merriman, who takes care of his family after his mom dies and wants to make life better for all of them. He wins a new house for them, with a helpful virtual housekeeper AI called PAT (voiced by Katey Sagal).

Things go well at first. But then the house takes on a mind of its own after Ben wants to make the OS more motherly after his father starts dating the house's creator Sara. Let's just say she takes on the role a little too well.