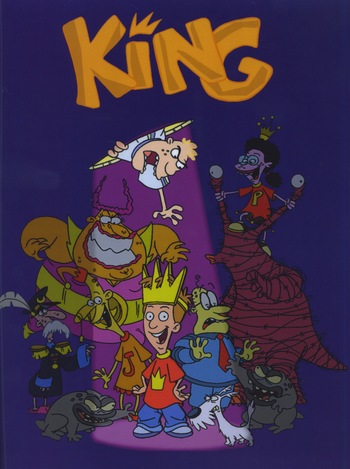 Russell: "Okay, here's how it happened: We moved into a new house—I know this sounds weird—but I found a secret passage under my bed, and there was another world down there called Under, and I am king of the whole crazy place! (...) You wouldn't believe the stuff that happens down here! ...Or maybe you would!"
— Opening Narration
Advertisement:

King is a Canadian animated series created by animator Gordon Coulthart and developed for television by TV writers Alan Templeton and Mary Crawford. The show was produced by Canadian studios Funbag Animation and Decode Entertainment (now part of WildBrain).

The series follows Russell Wright (Mark Rendall), a 12-year-old boy who's recently moved into a new house. When his family first arrives, Russell sees a something strange in one of the windows. When he goes to the corresponding room, he finds a bed, where the strange thing ducks under. Russell follows it, and finds himself crawling through a tunnel to the bizarre and magical land of Under, where he is then crowned the new king.

Unfortunately, not everyone is too happy with this. In particular, Bob Wire (Cal Dodd), the guy who was acting as king until a new one arrived. He wants the crown back, and he won't rest until it sits atop his head again. There's also Cliff (Robert Tinkler), a local bully who was the previous ruler of Under, and doesn't like that Russell took that from him, as well as Auntie First (Marnie McPhail), the despotic ruler of Near Under who is accompanied by her gentlemanly right-hand man Captain Darling (James Kee).

Thankfully, Russell isn't alone. With the help of his royal court, consisting of Vernon the android (Robert Tinkler) and Loopy the jester (Adam Reid); the Ex-Princess of Near Under, Populah (Julie Lemieux); and Gus (James Kee), Russell's dog who followed him into Under (and can talk down there), Russell navigates the ins and outs of being a king, goes on adventures all throughout Under, and does all he can to keep Bob Wire, and other enemies of Under, from taking the crown.

Not to be confused with a Canadian police drama that debuted on Showcase in 2011.