Literature / The Thief of Always 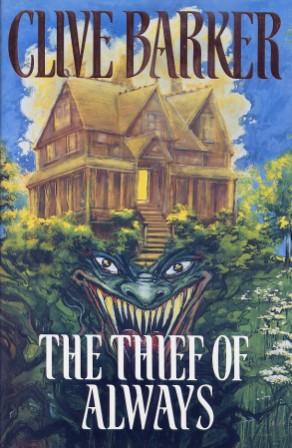 The Thief of Always is a fable written by Clive Barker that may read like a children's book, but it's just as enjoyable for adults. It deals with temptation, growing up and mortality, and it has a few good helpings of horror, as expected of Clive Barker.

Ten-year-old Harvey Swick is unsatisfied with boring, day-to-day life; he is sick of dealing with school, homework, nagging parents... Until a shady figure named Rictus appears in his room and offers him a stay at the "Holiday House", a paradise where kids don't age or ever have work. There are four seasons a day, every night is Christmas, and the House grants any wish, all made possible by a man called Mr. Hood.

Harvey quickly befriends the incumbent residents of the house: two other kids named Wendell and Lulu, kindly caretaker Mrs. Griffin and her seemingly sentient cats, and two of Rictus's "siblings". However, some sinister hints are dropped, such as the collection of children's clothes in the attic, the foreboding lake with child-sized fish behind the House, and mentions of a fourth member of Rictus's family called "Carna". Above all, who is Mr. Hood and where does he get his power from? Eventually, Harvey's curiosity and growing suspicions about the House lead him to discover some unpleasant truths...