Literature / Tess of the d'Urbervilles 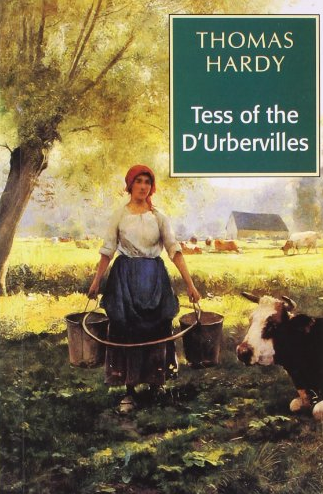 The book tells the story of Tess Durbeyfield, a poor but beautiful peasant girl. When the book begins, her father, John, finds out from a genealogist that his surname is really d'Urberville, which makes him and his family of noble lineage. Meanwhile, Tess participates in the local village May Dance. There she meets a young man named Angel Clare. Before they can dance with each other, however, Angel leaves; Tess believes she has been snubbed.

After the dance, Tess must ride to market because her father is too drunk from celebrating his new heritage. On the way there, she falls asleep on her horse, causing it to run into a carriage and die.

Feeling guilty, Tess's parents have her leave home to live with one of her apparent relatives, Mrs. d'Urberville, and her son, Alec. Tess begins working for Mrs. d'Urberville as poultry keeper. Alec takes a romantic interest in Tess; she remains, for the most part, uninterested. However, one night, on their way home, Alec intentionally gets them lost and rapes Tess. The rest of the novel recounts what happens to Tess's life after this incident and how her reputation is ultimately wrecked.

Because of the themes presented in the book, such as religious themes — and, God forbid, an unmarried woman who's not a virgin being presented as ultimately moral and good — it was controversial in its time. Today, it is hailed as classic literature.

Tess of the d'Urbervilles has been made into a theatrical film at least three times including Tess, a 1979 film directed by Roman Polański that starred Nastassja Kinski; there are also four made-for-television movies and miniseries. There have also been several plays and even an opera made of it.