Series / Nathan for You 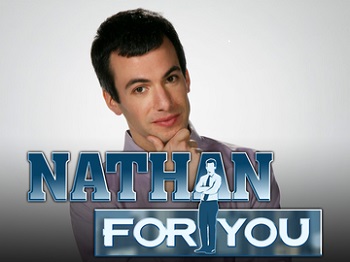 "Well, I have an idea but it's...pretty crazy."
"My name is Nathan Fielder, and I graduated from one of Canada's top business schools with really good grades. Now, I'm using my knowledge to help struggling small business owners make it in this competitive world."
— Opening narration
Advertisement:

Nathan for You is a docu-reality comedy television series starring Canadian comedian Nathan Fielder that ran for four seasons, from 2013 to 2017. Fielder portrays a well-meaning business school graduate who offers to help struggling businesses with his (questionable) marketing ideas. These ideas run the gamut from "flawed" to "overly elaborate and insane." After its debut, it became a critical and cult favorite, with the stunt from season 2's "Dumb Starbucks" gaining major viral attention and news coverage.

On October 17, 2018, Comedy Central announced that Fielder had decided against doing a fifth season, ending the series.

"Some Tropes might happen here, and if they do...so what?":