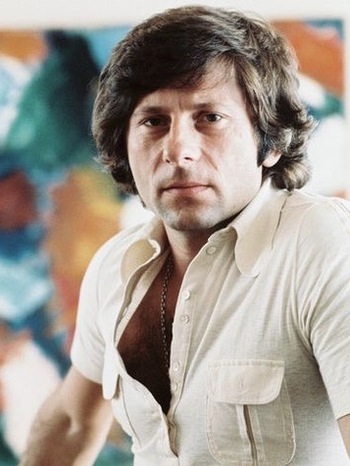 "I am widely regarded, I know, as an evil, profligate dwarf."
— from his autobiography Roman (1984)
Advertisement:

Roman Polański (born Raymond Thierry Liebling; August 18, 1933) is a famous Polish-French director, producer, actor, and convicted sex offender whose own life story is just as fascinating (and depressing) as his films.

Polański was born in Paris to Polish-Jewish parents. When he was four, the family returned to Kraków less than three years before the German invasion and occupation of Poland. His parents were subsequently deported into concentration camps, and his mother was killed in Auschwitz. He became a drifter after surviving in the Kraków Ghetto, traveling the country and staying with various families while also supporting himself by acting in local stage shows. After the war, he studied cinema in Łódź in the 1950s, and came back to Paris in the 1960s.

Polański gained acclaim for films like Knife in the Water and Repulsion, and began a successful Hollywood career. While going far outside his usual material directing and starring in the horror parody The Fearless Vampire Killers, he fell in love with his co-star Sharon Tate and they were married soon after in January 1968. Just over one year and a half later, on August 8–9, 1969, Tate was murdered by the death cult of Charles Manson just weeks away from the birth of their first child while Polański was making a film in Europe. Never a very sunny filmmaker to begin with, his movies naturally became even grimmer after this; he managed to make a film of Macbeth even darker than Shakespeare's original.

Another turning point came in 1977. Polański was arrested in Los Angeles and charged with drugging and sexually assaulting 13-year-old Samantha Geimer (née Gailey), whom he was photographing for the French edition of Vogue magazine, following a photo shoot at his friend Jack Nicholson's house. (Nicholson was away on a ski trip at the time, while his then-girlfriend Anjelica Huston, who also lived there, had been out of the house and returned to encounter Polański and Geimer as they were leaving together.) As part of a plea bargain, Polanski pleaded guilty

and submitted to a stay at Chino State Prison

, where after a 42-day period he was released. When Polański got wind that the judge in the case intended to overrule the plea bargain, return him to prison, and extend his sentence, he fled to France, where he has citizenship. He also sold off his house in the UK and never returned there. Now unable to enter any countries that had an extradition agreement with the US, Polański nonetheless continued making films, which — with select exceptions (The Pianist and Tess) — did not match the critical and financial success of his early career. Contrary to popular belief, Polański only ever made two films in Hollywood (Rosemary's Baby and Chinatown). He has made 12 films since his exile, and in 2002, he won his first Best Director Academy Award for The Pianist; the statuette was accepted on his behalf and delivered to him by Harrison Ford, who'd starred in his film Frantic. In 2005, the American arrest warrant on him became an international one, and four years later, he was re-arrested on it (while at a ceremony to accept another award) and had to finish post-production on The Ghost Writer from prison.

After Polański had spent several months under house arrest in Switzerland awaiting extradition to the US, the Swiss government announced in July 2010 that they were turning down the extradition request after apparently coming across problems with the request and considering "national interests"; he is now free once again. In 2015, a second extradition request with the government of Poland was turned down as well, which was appealed until December 2016, when the Polish Supreme Court definitively upheld the Swiss government's verdict, turning down any further attempts to extradite him

. In the meantime, six different women have come forward to accuse the director of having assaulted them as teenagers. In 2018, the Academy of Motion Picture Arts and Sciences voted to expel Polański from its membership.

Polański remarried to French actress Emmanuelle Seigner (who is 33 years younger than him and starred in several of his films) in 1989. They have two children, including actress Morgane Polanski.