Literature / That Was Then... This Is Now 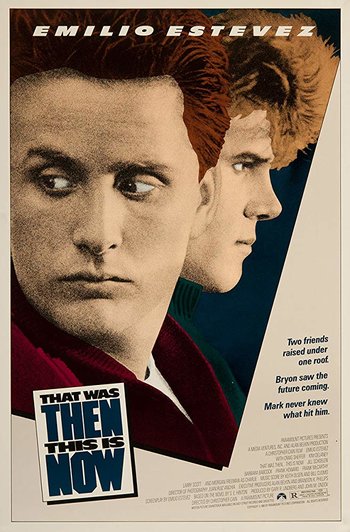 "You know what the crummiest feeling you can have is? To hate the person you love the best in the world."
Advertisement:

Mark and Bryon are best friends, the closest thing to a brother either of them has ever had. Both are sixteen-year-old greasers— pool hustlers, hoods. Mark can get away with anything, and Bryon can lie about anything. They're the perfect team. Over the year that passes, they come to see just how rough life treats the poor kids like them. The owner of the bar where they hustle pool at is shot. An innocent guy gets beaten half to death. Drugs show their effect on a child once intelligent and sensitive. Worst of all, Mark has turned out to be a completely different person than Bryon had estimated him to be. Should Bryon turn in someone closer than a brother to him?

That Was Then, This Is Now is a 1971 coming-of-age novel by S. E. Hinton, the acclaimed author of The Outsiders and Rumble Fish. The book gives a darkly realistic portrayal of greaser culture in 1960s Tulsa, Oklahoma. A film adaptation was made in 1985, directed by Christopher Cain and starring Emilio Estevez (who also wrote the screenplay) as Mark and Craig Sheffer as Bryon.

Alternative Title(s): That Was Then This Is Now