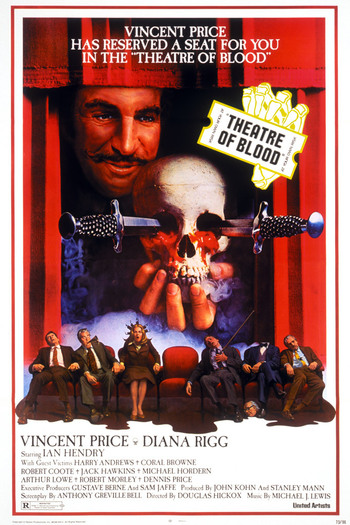 "It's him all right. Only Lionheart would have the temerity to rewrite Shakespeare!"
Advertisement:

Theatre of Blood is a 1973 British Horror Comedy film directed by Douglas Hickox and starring Vincent Price, who regarded it as one of his personal favorites. Also in the cast are Diana Rigg and an impressive coterie of British character actors, including Ian Hendry, Harry Andrews, Coral Browne, Robert Coote, Jack Hawkins, Michael Hordern, Arthur Lowe, Robert Morley, Dennis Price, Eric Sykes and Diana Dors, to name just a few.

Years prior to the start of the film, Edward Lionheart (Price) was one of the self-styled stars of the Shakespearean stage, decidedly unloved by the critics of various papers. His performances in his final year, though playing to packed theatres, were panned at each and every opportunity, until finally they unanimously gave the Critics' Award to a new, uprising actor. This pushed Lionheart to the depths of despair, and in a singular act, he ended it all, jumping off a building while clutching the award which he felt was rightfully his, with his horrified daughter Edwina watching and the critics being amused at his fate.

The film opens with one of these critics being informed that a number of vagrants have begun squatting on a condemned building of his. Despite being warned by his wife that she had a dream of a pack of lions descending upon him, and the horoscope (for March 15th) claiming that it wasn't a good idea to be incautious, he runs off to the building, where he's confronted by the same vagrants who he was about to forcibly remove - and stabbed twenty two times, while the local constabulary looks on.

The perpetrator, of course, is Lionheart, who - having survived his suicide attempt, thanks to a kindly bunch of methanol-drinking homeless chaps - has decided to revisit his last run in the theater... and provide a very special command performance for each of the critics in turn.

In 2005, a stage adaptation was produced in London by the British company Improbable, starring Jim Broadbent as Lionheart and Rachael Stirling (Diana Rigg's daughter) as Edwina (renamed Miranda).

Theatre of Blood contains examples of:

Tropes found in the theatre adaptation: