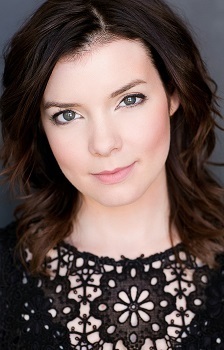 Describe Cherami Leigh here and get your ass moving now, damn you.

Cherami Leigh (pronounced SHER-ah-mi LEE) Kuehn (born July 19, 1988) is an American actress born in Texas. You may or may not recognize her as one of the Radio Disney voices during promotions and commercials, which she has been working as for over ten years.

For anime voice-acting, she primarily worked for Funimation, and is noted for her cutesy voices that can become rather deep and scary if necessary; her most well-known roles are probably Lucy Heartfilia of Fairy Tail and Patti of Soul Eater, yet for a long time, she appeared in basically every Funimation show, like the other voice actors there. For that matter, her voice range is similar to Yukari Tamura's. Her first recurring anime role was Sae from Peach Girl.

She currently works in L.A. where she has done the English voice for Asuna Yuuki in Sword Art Online and Sailor Venus in Sailor Moon. The move has also opened more opportunities for her live-action work too. She appeared on Friday Night Lights as Ginnie Warwick, and appeared multiple times on Walker, Texas Ranger. She also played Sarah on the short-lived The Deep End. She has also gained more prominence in video game voice acting, with the likes of Makoto Nijima from Persona 5, A2 from NieR: Automata and her roles as Mae, Caeda, and Rhea in the Fire Emblem series being some of her most recognized roles.

Nobody said there would be so many roles!

Cherami Leigh and her works provide examples of: