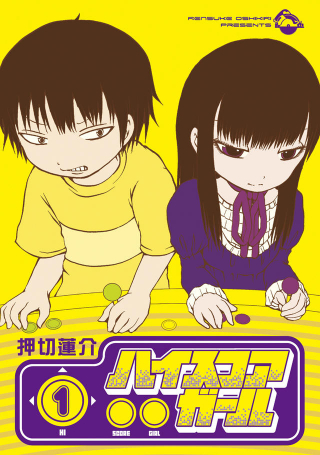 "The world wavered in 1991...and a bond with that girl began."note Haruo Yaguchi (left) and Akira Oono (right)
"Watch out sister, here comes THE TWISTER!"
—the tagline
Advertisement:

1991: the renaissance of arcade gaming. 6th grader Haruo Yaguchi, an unpopular boy at school, would rather spend time playing Street Fighter II at the local arcade than take his daily life seriously, earning him the (self-appointed) moniker "Beastly Fingers Haruo". However, things would take a turn one day when he encounters honor student and rich girl Akira Oono dominating everyone else at his favorite game with Zangief. Having lost to her 7 times in a row and eager to break her 29-win streak, he resorts to underhanded tactics with his own favorite character Guile, an act which earns him a solid right hook from the otherwise quiet and aloof girl—and ultimately sparks their rocky relationship as she brazenly follows him from arcade to arcade after school.

Written and illustrated by Seinen mangaka Rensuke Oshikiri, High Score Girl is a coming-of-age romantic dramedy manga that chronicles the Odd Friendship between the under-performing Jerk with a Heart of Gold Haruo and Lonely Rich Kid Akira as they slowly bond through their shared enthusiasm for video games. It was first published in Square Enix's Big Gangan Monthly magazine in 2010, with the final chapter having been released on October 2018 after a lengthy delay (see below).

In 2014, SNK Playmore attempted to file a lawsuit against the publishers for alleged copyright violation alongside several other game developers, citing the illegal usage of their trademarked properties in the manga after learning of the planned animated adaptation. As a result Square-Enix was forced to temporarily pull out all printed volumes of the manga until a settlement was reached in 2016, allowing the manga to be republished under the new title of High Score Girl: Continue.

In February 2017, the author launched his own Twitch gaming channel

An anime adaptation had initially been announced in 2013, but was delayed by the aforementioned lawsuit (and in fact was the catalyst for the breach of intellectual property claims coming to light) until 2018, when it was finally announced that JC Staff would be at the helm. The first episode aired on July 17, 2018. Netflix picked up the anime and released it worldwide on December 24, 2018.

In late December of 2019, the spin-off/sequel High Score Girl DASH began serialization, focusing this time on Hidaka. The manga takes place roughly ten years later and focuses on 29-year-old Hidaka, who has become a middle school teacher in the time since the original series.

Not to be confused with High School Girls.