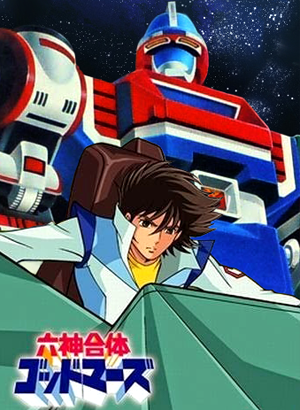 Takeru and his robot that doesn't need fancy animations to kick ass.
Advertisement:

Six God Combination Godmars was a 64-episode anime series that aired in 1981 to 1982 in Japan, Hong Kong and Italy. Other loosely translated names are "Hexademon Symbiote Godmars", "Six God Union Godmars", "Six Gods United As One Being". It is very loosely based on Mars, a 1976 manga by none other than Mitsuteru Yokoyama, of Sally the Witch, Giant Robo and Gigantor fame.

In the year 1999, humanity begins to advance beyond the known Solar System. The small planet Gishin, led by the Emperor Zuul, who aims to conquer the galaxy, runs into conflict with Earth. He targets Earth for elimination and to do this, he sends a male baby called Mars to live among humanity. Accompanying the baby is a giant robot named Gaia, which utilizes a new power source strong enough to destroy an entire planet. As planned, Mars is expected to grow up, where he will activate the bomb within Gaia to fulfill his mission of destroying the Earth. However, when Mars arrives on Earth, he is adopted into a Japanese family and given the name Takeru Myoujin. Seventeen years later, Takeru has grown up with a love for humanity and refuses to detonate the bomb as ordered by Zuul. However, if Takeru was to die, the bomb within Gaia would explode anyway...

Takeru possesses psychic powers, letting him pilot Gaia with his mind. He decides to join the Earth defense forces and becomes a member of the Crusher Squad (an elite space defense force), where he and his friends take a stand against the Gishin's attack. Oh, and there's also the relationship of Takeru with his older brother Prince Marg, which fate would have it, pitted the two against each other in the war.

The God Mars robot is the basis for the Mighty Orbots, at least in combined form; the original God Mars toy was planned to be retooled and released as an Orbots figure, but a lawsuit ended that plan (though prototypes were made and featured in toy catalogs).

For viewers in the US, it's available at Hulu