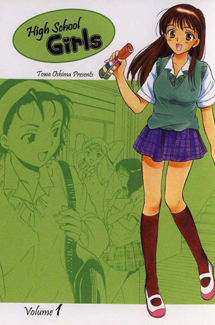 Eriko is disgusted with her daily life in her co-ed junior high, and so she sees her admittance into a prestigious, all girls high school with a mix of delight and hope, believing that it will allow her to enter a world of dignity, order, cleanliness, and beauty.

Oh, how wrong she is.

High School Girls (also known as Girls' High, and originally titled Joshikousei) is a manga by Towa Oshima, which was serialized from 2001 to 2006 (running from 2001 to 2004 in Manga Action before moving to Comic High! for the rest of its run). It focuses on a group of normal, average high school girls and the dilemmas they face involving teachers, boys and themselves, and features nice drawings, abundant raunchy humor and some nice lessons about life. It was adapted into a 12-Episode Anime series in 2006. One of the most disturbing facts about this series is that the original manga was closely based on the author's experiences going to an all girls school, so go figure.

Not to be confused with Joshi Kausei, another manga series whose name means the same thing, but is written with different kana.

Example of:
Afraid of Needles