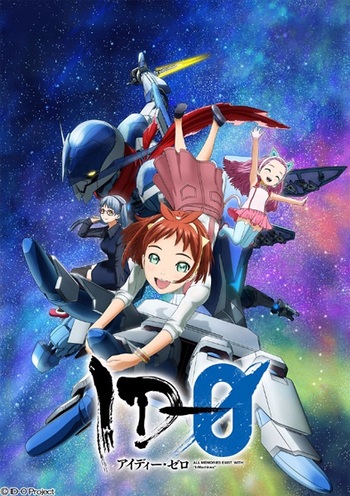 In the distant future, the discovery of the new mineral "Orichalt" has allowed humanity to expand beyond the Sol System. On the constant lookout for Orichalt, humanity has developed I-Machines, robots that operate in extreme environments. I-Machines function by transferring a human pilot's consciousness into the robot's operating system; in that sense, the human becomes the machine.

Maya Mikuri, student at the Academy planetary alliance, is handling investigation and excavation work on an asteroid in the Albireo star system, accompanied by her teachers. But following a malfunction with her robot, Maya finds herself being rescued by an I-Machine group calling themselves Excavators. The group is part of Excavators GP, a business dealing in Orichalt excavation, and every one of them has their own unique quirks. The Excavators agree to return her home if she helps with their work.

ID-0 is a CGI anime series produced by Sanzigen, premiering on April 9, 2017, for the spring 2017 anime season. Netflix has licenced it for worldwide streaming and released it on October 6, 2017.

Not to be confused with ID4.