Manga / His and Her Circumstances 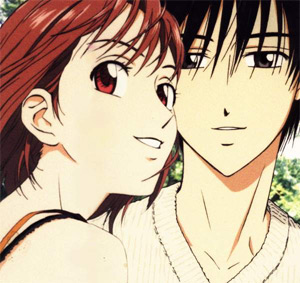 An Attention Whore and a Broken Ace.
Advertisement:

His and Her Circumstances (Kareshi Kanojo no Jijō, or KareKano for short) is a Shoujo manga by Masami Tsuda. It originally ran in LaLa from 1996 to 2005.

When a new student, Soichiro Arima, proves himself the equal of Yukino, her narcissistic edifice is threatened with collapse, so she begins to plot Arima's downfall, whilst maintaining an air of friendship with him. A chance encounter leads Arima to discover Yukino's secret and romance begins to blossom as they both learn to just be themselves, as hard as that turns out to be.

The manga was adapted to anime by Studio Gainax in 1998, directed by Hideaki Anno, of Evangelion fame. It was Gainax's first TV series to adapt an existing manga by an outside creator. note  The studio had earlier produced or co-produced several OAV manga adaptations, and the Evangelion manga by Yoshiyuki Sadamoto debuted before the TV series. The anime began as a faithful adaptation of the manga, if somewhat quirkier in style. Halfway through, the anime's story goes in a completely different direction from the manga, which eventually led to an inconclusive ending. Tsuda herself was notably disappointed by the anime. The disputes, among other things, led Anno to step down as series director after episode 15 (his replacement was Gainax producer Hiroki Sato), although he wrote eight of the remaining episodes. Meanwhile, the manga continued for several more years, exploring the several parallel lives of supporting characters, as well as the main characters' pasts (and even their families' pasts), finally concluding with its 21st volume.

Compare and contrast Mars (1996), which similarly follows a couple whose relationship helps both individuals confront and deal with their personal insecurities and past trauma, albeit in much more melodramatic fashion.

Alternative Title(s): Kare Kano, His And Her Circumstances