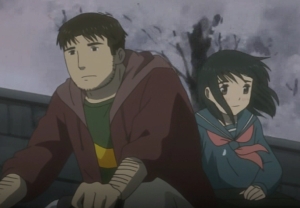 After his girlfriend dumps him for someone else, 27-year-old Koshiro, a matchmaking service employee, has a chance encounter in the subway with a 15-year-old high school girl named Nanoka. He later meets her again at the entrance to an amusement park and since he has just been given two free tickets to it, he invites her to go with him. Nanoka herself has been having a bad day as well, as she'd just been rejected by the boy she had a crush on after admitting her feelings for him. Each being rather down over their lack of luck in the love department, they immediately feel an emotional connection across their age difference as the afternoon progresses.

Upon leaving the park, they suddenly discover that they are brother and sister when they both recognize and greet their father as he's arriving. This comes as quite a shock, since they haven't seen each other since their parents got a divorce with split custody nearly a decade ago. Moreover, Nanoka is now moving in with her father and brother since their house is much closer to the high school she's attending. Against their better judgment, that first spark of mutual attraction slowly ignites into something deeper and more powerful as time progresses, especially since Nanoka develops a huge big brother complex and she is not deterred in the least by Koshiro's boorish and unsociable nature.

Koi Kaze by Motoi Yoshida started out as a manga series which then got adapted into an anime series in 2004 and immediately received a lot of attention for its harrowing and realistic examination of sibling incest. The painful and guilt-ridden romance between Koshiro and Nanoka is credibly full of angst and Belligerent Sexual Tension as the two struggle against their desires, refreshingly devoid of the blithe disregard for social mores and fanservice most Shōnen series on similar subjects tend to have.