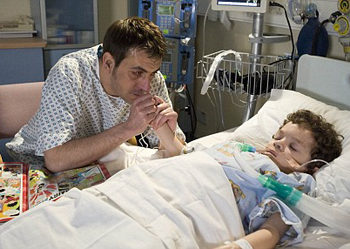 Bender: You were in the best coma I've ever seen!
Amy: [Leela, you were out for] two weeks. Fry never left your side for a minute.
Zoidberg: And he talked nonstop, like a parrot of the sea, he was!
Fry: I thought if you heard a familiar voice, it might help you wake up.
Leela: (hugs Fry) You could really use a shower.
Fry: You too.
— Futurama, "The Sting"
Advertisement:

If a character, often a hero, is in a coma, unconscious, ill beyond lucidity, has had their soul stolen, has just had major surgery or whatever, then the odds are that they will have a friend or family member who refuses to leave their side. Ignoring all distractions and necessities, they will keep watch over them. Other well-meaning characters may urge the watcher to go take care of themselves, but their efforts always fail. As long as their charge is helpless, the watcher isn't going anywhere.

The watcher may keep their vigil until they pass out from exhaustion, usually slumped over their charge's bed. Sometimes they'll be reawakened only when their charge comes to. Other times they're found by a third party who was just coming to see if they could talk the watcher into going home and resting this time. Having realized its futility, they will make do with a Comforting Comforter.

You might well find this trope in a Sick Episode or Fever Dream Episode (though in the latter it can be tricky to tell what's going on...) Occasionally emotion has nothing to do with it. Maybe the unconscious is the primary witness in a murder case, and the watcher is a detective waiting to spring the second there's a flickering of consciousness, for example.

Sometimes they are trying to save the unconscious person from the terror of Dying Alone.

Sister trope to Converse with the Unconscious, which often occurs in conjunction with the Unbroken Vigil.