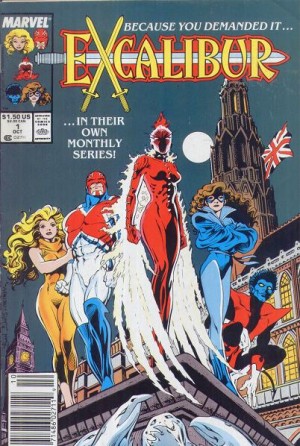 A Marvel Comics Super Team, where the X-Men franchise intersected with the Marvel UK imprint.

After the Mutant Massacre storyline left the X-Men broken, injured members Shadowcat and Nightcrawler were sent to Muir Island in Scotland to recuperate. As a result, they weren't with the X-Men when the team sacrificed their lives to defeat The Adversary on national TV during The Fall of the Mutants arc, and like the rest of the world, didn't know the X-Men got better afterwards. Chris Claremont and artist Alan Davis decided to use this opportunity to put the characters into a new team that incorporated the British characters Captain Britain and his Magical Girlfriend Meggan, who had little U.S. exposure at that point but ties to the X-Men through Cap's sister Psylocke.

So Phoenix (Rachel Summers), who had previously been lured to a parallel dimension by X-Villain and Large Ham Mojo, escaped to Muir Island shortly after the X-Men's "deaths" with Mojo's Warwolves hot on her trail. Obstructive Bureaucrat Saturnyne also decided that Phoenix was a threat to all reality and sent a group of interdimensional bounty hunters known as the Technet to capture her. Kitty Pryde, Nightcrawler, Cap and Meggan are soon brought into the fray, banding together to rescue Rachel while reminiscing about the X-Men and deciding to keep Xavier's dream alive, thus founding the team.

Then the quirky metal creature and living portal known as Widget found them, and the team was thrown into a series of interdimensional wacky hijinks across The Multiverse for some time. The series started in 1988 and lasted a good decade. For a while, it was known as the weird and comedic X-book.

But no team with Mutants can ever stay light-hearted for long in the Marvel Universe, so they eventually returned to their angsty X-Roots and eventually became just another mutant book. Since then, the team has broken up and reformed a couple of times, with different membership each time. The Spiritual Successor Captain Britain and MI13 (even featuring the actual Excalibur sword) was also cancelled after 15 issues.

The title was resurrected as part of the Dawn of X initiative with Brian's sister Betsy (no longer inhabiting Kwannon's body) taking up the mantle of Captain Britain and leading a new team to help guide a new age of magic. For tropes pertaining to that series, see Excalibur (2019).

No relation to the short-lived Excalibur title that followed Professor Xavier's adventures on Genosha (aside from Marvel and/or Claremont wanting to keep the name in print). Captain Britain and the Black Knight also show up as playable characters in Marvel: Avengers Alliance along with some of the mutants in Excalibur, and MI13 and Faiza also get mentioned.

These comic series provide examples of: