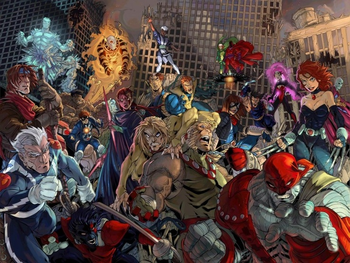 What happens when The Chosen One dies? THIS!
Advertisement:

In 1995, this crossover from Marvel Comics among the X-Titles began when Legion, son of Professor Xavier, traveled back in time to kill Magneto, but ended up killing his own father instead. This story, itself a minor crossover called Legion Quest, led to the main Age of Apocalypse crossover.

For four months the X-titles were replaced by miniseries that took place in the Alternate Universe that had come about for want of an Xavier. This Bad Future Villain World was a dystopian Crapsack ruled by the titular Apocalypse, where heroes were villains, villains were heroes, and Anyone Can Die. The non-mutant comics weren't part of the crossover, though the two-issue miniseries X-Universe did show what happened to the non-mutant Marvel heroes in the new history. Scott Lobdell directed the overall story arc and some of Chris Bachalo's best work is featured in this series. The series were renamed as follows:

The Constant was Bishop. Hailing from an alternate future, he was already a chronal anomaly and thus unaffected by the change. He was the only one who remembered the world 'as it should be' and convinced the heroes to Set Right What Once Went Wrong, even though it would mean that their own timeline would cease to exist. It turned out that the world was doomed anyway, as both hemispheres would have been leveled by nuclear attacks. Some characters managed to escape the closing of the temporal singularity and entered normal Continuity. One who failed to make it back was the remarkably popular Blink, the second of her lamented deaths. Death may be cheap, but she did not return until five years later in a four-issue self-titled miniseries which segued into Exiles, a series about a team of characters who are all Unstuck in Time.

On the tenth anniversary a sequel miniseries was produced, which isn't very popular among fans; among other things, it shows little evidence of the devastation evident in the original series. There was also a "What If" story pitting the survivors of the original series against Galactus. An arc in Uncanny X-Force paved the way for a 2012 series for the survivors.

A shining example of the Darker and Edgier comics of The '90s: a literal post-Apocalyptic warzone.

Tropes featured in the series