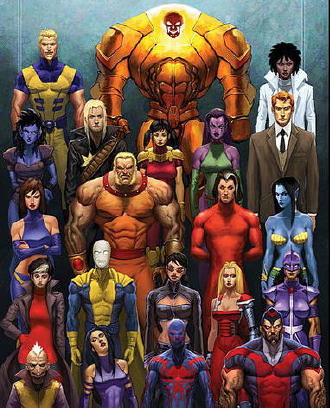 These are just a few of the characters featured.
Advertisement:

There's more to the universe than we know. There are hundreds, thousands, perhaps infinite versions of reality, each branching off from choices that were made differently, from events that had different outcomes. In one world, a familiar superhero became a world-wrecking dictator. In yet another, the man who we've all known as the champion of superhuman equality instead became the most feared mutant on the planet.

Little does anyone know, but all of these different realities are linked, part of a great whole.

And now... they're breaking.

Each universe going out of balance destabilizes the next, setting up a cascade effect that will certainly end in the destruction of all existence.

Each Exile is an X-man or a "good guy" mutant in his or her reality. The original team was composed of Mimic, Morph, Magnus, Thunderbird, Nocturne, and the Age of Apocalypse's Blink. They all meet on a desert plain, and the Timebroker appears before them, explaining that the instability in the multiverse has led to all of them suffering a terrible fate — death or worse. To combat this, they've been drafted to fix the various problems in each reality, which will eventually allow them to go home.

Their missions take them across a wide variety of dimensions, some of which are different takes on Marvel Comics' main setting, the Marvel Universe (or Earth-616). In other cases, they visit the nooks and crannies of Marvel's long publishing history, including The New Universe of the 80's, and the 2099 setting (where they even recruit 2099's Spider-Man).

Unlike many popular comics, this series stays surprisingly true to Anyone Can Die. Much more often than not, a character's death is irreversible. At least in the earlier parts of the series, whenever a character would die, he'd get a replacement, one with a similar class of powers (substituting Sasquatch for Thunderbird, for instance). This was balanced by the fact that at least some of the characters got happy endings, either in the form of permanent vacation or being able to go back to their home realities and pick up their lives where they left off.

Later in the comic's run, it was taken over by Chris Claremont. The series was shortly relaunched as "New Exiles," and Claremont kept creative duties until that title's cancellation. The series saw a (unfortunately brief) relaunch in 2009 (in the hands of Jeff Parker) that lasted from April until December of that year, but the series was canceled afterwards. It subsequently got a Spiritual Successor in Greg Pak's X-Treme X-Men.

In 2018, Exiles was relaunched with a new team and concept. Tropes for that series can be found here.

Morph: That was one of the smoothest planet hops yet! Very low nausea quotient. I might only gag as opposed to doing the full technicolor yawn.