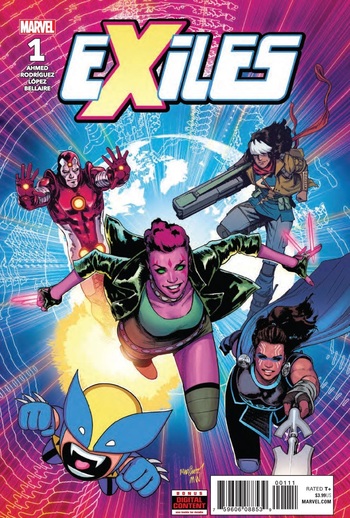 Following Exiles, New Exiles, and Exiles vol 2, this series ran from 2018 to 2019. The title is written by Saladin Ahmed & drawn by Javier Rodriguez, with guest artists such as Rod Reis. The series is the revival and third volume of the Exiles franchise, released during the Marvel Legacy relaunch.

The story once again follows the young mutant, Blink. This time around, she is joined by Kamala Khan (formerly Ms. Marvel), Valkyrie, Iron Lad (Nate Richards), and Wolvie. They take up the Exiles mantle once again as they travel through the Multiverse. They're brought together for the first time to destroy a new threat that's eating away at the Multiverse, threatening to destroy everything & everyone one. The Unseen, formerly Nick Fury, calls on the champion, Blink, to set things right again. However, this is only the beginning for Blink & our new team of Exiles.